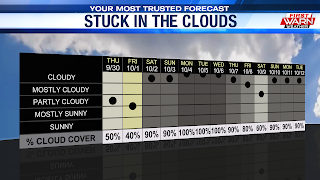 When it comes to seeing any rays of sunshine during the month of October, we really haven't seen much. In fact, of the first 12 days of the month, 11 of them have come in either with mostly cloudy or overcast skies. Despite much of the daylight hours on Tuesday featuring overcast skies, it was a beautiful sight to see some sunshine before the day came to a close. With that being said, cloud cover will once again be a big part of today's forecast, which will eventually lead to our next rain chance. 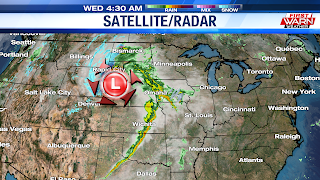 A strong and very dynamic storm system over the Upper Great Plains will quickly bring the Stateline it's next shot to see some rainfall, with chances beginning after mid-morning. Guidance does show a wave of showers and embedded thunderstorms moving in closer to the noon hour, with the activity continuing into the afternoon. Following this initial round of showers and thunderstorms, things will quiet down a bit, but we'll remain under a blanket of clouds. As a warm front lifts into the Stateline, a cluster of sprinkles/light showers and possibly a few isolated non-severe storms will be possible this evening. 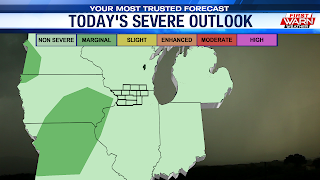 As far as the severe risk is concerned, it's very low for the Stateline. The Storm Prediction Center shifted the Marginal Risk (level 1 of 5) a bit further to the southwest, including portions of southeastern and eastern Iowa. Quickly behind the warm front, the associated cold front will slide through, allowing conditions to quiet down into Thursday. Cloudy skies early in the day will give way to a partly cloudy sky by the afternoon. 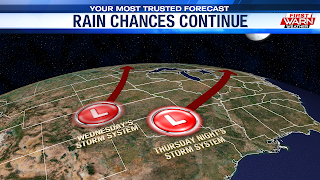 Quickly behind the warm front, the associated cold front will slide through, allowing conditions to quiet down into Thursday. Cloudy skies early Thursday will give way to a partly cloudy sky by the afternoon. However, it won't be too long before clouds fill back in, with another round of showers moving in by Thursday night.

The amount of shower activity we see during this time frame will all depend on the track this storm system takes as it approaches the region. Models his morning were in disagreement with the surface low's track, with one coming in a bit more south than the other. But just know that showers will be possible overnight Thursday into Friday morning, with conditions drying out for the weekend.

Posted by First Warn Weather at 6:56 AM