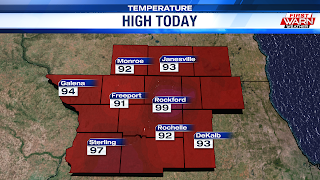 Through the first one-third of the month, Rockford is on track for the third warmest June on record with an average temperature of 76.5° through the first ten days which trails only 1933 and 1934. The extraordinary heat carried into Friday with a high temperature of 99° recorded in Rockford. This surpassed the prior record of 98° set back in 1911 for the warmest June 11th in Rockford history. This was the third day in the past week with a record-breaking or record-tying high temperature. It was also the first time Rockford recorded a temperature this high since July 25, 2012. 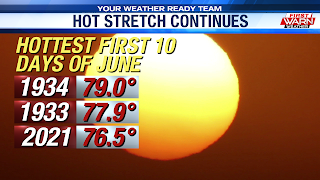 This heat played a big role in firing up some strong thunderstorms later Friday afternoon. Among these scattered storms was one that spawned a severe thunderstorm warning and it pushed southeastward through Eastern Ogle County and DeKalb County. This storm produced torrential downpours, lots of lightning, and wind gusts upwards of 60 mph. Damage to siding and roofing, downed tree limbs, felled power lines, and devastated corn and soybean fields were among the damage associated with this particular thunderstorm. Several other storms pushed through parts of the Stateline but none quite achieved severe criteria before weakening as temperatures quickly cooled. Between 3:45PM and 4:45PM, DeKalb dropped 21° from 90° down to 69° following the arrival of the thunderstorm. 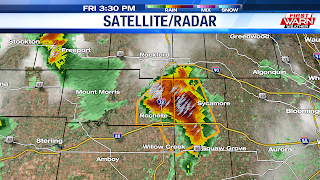 As of Late Friday evening, a cold front is draped across portions of Iowa and southeastern Minnesota. As this front pushes across the Stateline overnight, there is a chance for a few showers and possibly a thunderstorm or two. A slight chance for a couple of showers and perhaps a thunderstorm will continue into Saturday. This cold front will also keep temperatures slightly cooler for the weekend with the aid of some breezy northwesterly winds. Lower 90’s are forecast in Rockford for both Saturday and Sunday with most of the Stateline likely stuck in the 80’s. Also behind this cold front is some drier air that will slowly be moving in through the weekend, eventually clearing up skies for Sunday resulting in a sunny and likely rain-free end to the weekend. Similar temperatures are expected on Monday before another weak cold front will be moving in from the north late Monday evening. This will result in a much more comfortable Tuesday and Wednesday with highs in the lower to middle 80’s. Lots of sunshine is also forecast through the middle of the week with, unfortunately, minimal rain chances.
Posted by First Warn Weather at 10:15 PM No comments: