When can Northern Illinois Expect It's First Freeze? Temperatures across northern Illinois and southern Wisconsin are getting cooler and cooler by the day. And it's only a matter of time before we wake up and see frost on our windshields and lawns.

With that topic in mind, our average first Fall freeze is only a few weeks away. On average, the first 32 degree temperature reading usually occurs within the first week to week and a half of October. The earliest the temperature fell to 32 degrees was September 22nd, and the latest was October 28th. The average first hard freeze, temperature of 28 degrees or colder, typically occurs by mid-October. The earliest date the temperature fell to 28 degrees was September 30th, and the latest November 17th. 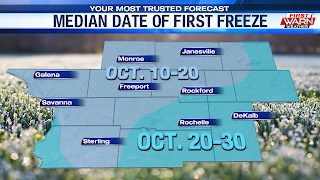 Here's a look the average first freeze for our other areas across the Stateline!

Posted by First Warn Weather at 10:25 AM