Humidity on the Rise for the Holiday Weekend 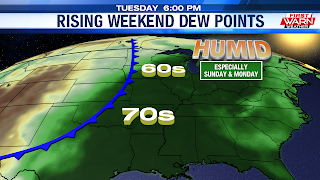 Clouds moved back in Thursday as low pressure to the southeast lifts back north and northwest. Moisture in the atmosphere has increased a little, but skies should remain rain free through Friday afternoon.

Winds shift to the southeast Friday and Saturday ahead of another low pressure system, forecast to move into the Upper Midwest Saturday afternoon. This low will likely bring a few thunderstorms to parts of the Stateline during the 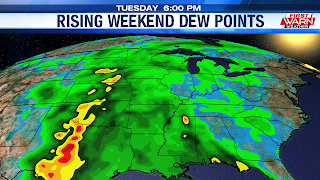 first half of the day Saturday. Strong to severe storms could redevelop during the afternoon, something we'll need to keep an eye on. Once that low passes Saturday evening, southwest winds will take hold through the remainder of the weekend and into early next week. The increase in the southwest wind will also bring an increase in moisture, pushing dew point temperatures into the mid/upper 60s, and even low 70s, in some locations across northern Illinois and southern Wisconsin. Sunday is looking to be a mostly dry afternoon as the greatest area for thunderstorm development remains further to the west. This will allow temperatures to rise, for most, into the mid 80s for the afternoon. Although there could be a few locations that reach the upper 80s. 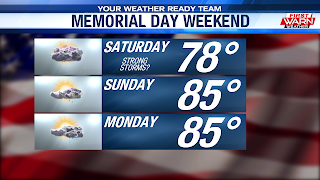 The combination of the warmer temperatures and high dew points will push the heat index for Sunday and Monday close to 90 degrees! And after a relatively 'cool' May, our bodies won't be quite used to that. The moisture will still be in place Monday with a slightly higher chance for thunderstorms during the afternoon. Storm coverage increases as a cold front comes in from the west Tuesday and Wednesday, and this could lead to heavier rainfall heading into the middle of next week.
Posted by First Warn Weather at 6:26 PM