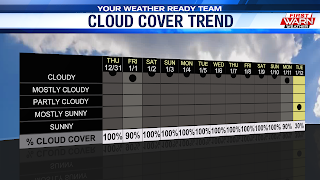 IT'S ABOUT TIME! For the first time in 2021, sunshine made it's presence known across the Stateline. Don't you just wish we had the ability to bottle it up and keep it around for a bit longer? Well, I am sorry to say that the norm for 2021, which has been a prolonged stretch of cloudy skies, returns for the middle of the work week. 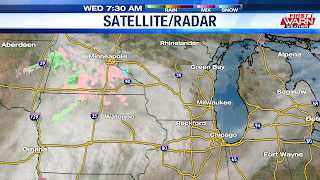 Radar towers to our northwest of the Stateline are showing some feedback with this weak disturbance, bringing a light wintry mix/light rain to portions of Minnesota and Iowa. Areas north of the Stateline, like Southern and Central Wisconsin, could squeeze in a stray shower or two this afternoon. However, a decently sized pocket of dry air still resides in the low-levels of the atmosphere. This might make it hard for any of that precipitation to make it to the surface. Under a mostly cloudy sky, today's southwest wind will help temperatures climb into the upper 30s. Yes, we trade in the sunshine for cloudy skies, but at least the warmth is here to stay. Skies look to remain relatively cloudy into the second half of the work week, ahead of a stronger storm system that looks to bring impacts into the weekend. 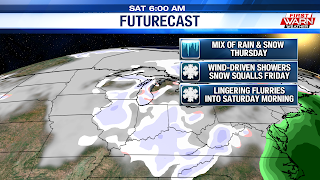 Hi-res models continue to keep the morning hours relatively dry on Thursday, so impacts to the morning commute are not likely. However, traveling may become a little more difficult once the afternoon rolls around. A cold front looks to bring widespread precipitation by the early afternoon hours. Since temperatures are going to be a few degrees above freezing before the front, this will likely start out as a cold rain. As cold air rushes in behind the frontal boundary, this may introduce a few snowflakes into the mix. Models continue to show a complete transition to snow by the evening hours. This snow could briefly fall in heavier bursts, potentially making roads slick in a short time and dropping visibility. You'll want to give yourself a few extra minutes for the drive back home Thursday evening. 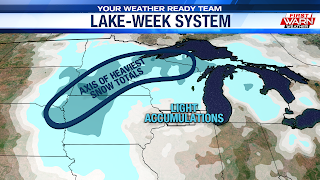 As we move into Friday afternoon, the associated upper-level low looks to slowly wobble right over the Stateline. This will bring the lift and the cold air needed for the snow potential to continue through much of Friday.With the position of the low, the axis of heavier snowfall looks to remain to our northwest. But as the system slowly meanders to the east, that could bring light accumulations to the Stateline as we enter the first half of the weekend. Behind the nuisance of a system, another shot of cold air arrives late Saturday into Sunday, cooling down highs closer to seasonable.

Posted by First Warn Weather at 10:14 AM