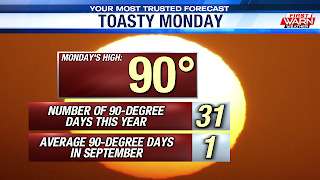 The workweek kicked off on a very summer-like note as the daily high temperature at the Rockford Airport just made it to the 90-degree mark. That now puts us at 31 90-degrees for the year. Following a cold front this afternoon, the heat and humidity look to ease up into our Wednesday. However, with a very summer-like pattern lasting into next week, the potential is there for 1-3 more 90-degree days. 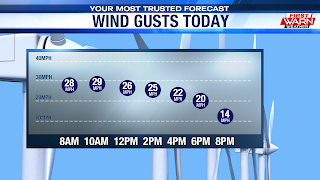 Tuesday looks to begin with mixed sunshine, with a little more cloud cover moving in for the afternoon as the cold front approaches. Winds during this time will become gusty out of the southwest, gusting up to 25 to 30 mph into mid-day. Temperatures ahead of this frontal passage look to quickly climb into the mid to upper 80s, with our daily high being achieved sometime during the early afternoon hours. Once the cold front officially slides through, our surface winds will then take a turn to the northwest, remaining breezy into the evening commute. It's this northwesterly wind that will help pull in a much cooler, less muggy air mass for the middle of the work week. 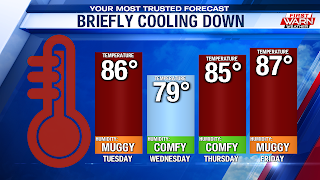 Quick To Warm Back Up:

Although this upcoming cool-down will be a brief one, it'll give our air-conditioners roughly 24 to 48 hours to take a breather. Behind the frontal passage, high pressure will take over both at the surface and aloft in the atmosphere, bringing a sun-filled and less breezy Wednesday. Highs temperatures will fall on either side of the 80-degree mark, with overnight lows both tonight and Wednesday night dropping into the mid to upper 50s. Winds will then take a turn to the southwest Thursday, quickly bringing back the 80s. Although we'll be a bit warmer, the humidity won't be an issue. However, that won't be the case as we move forward into Friday and the upcoming weekend!

Posted by First Warn Weather at 7:17 AM