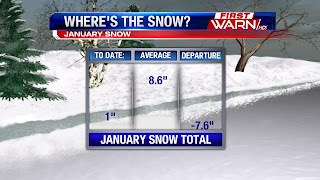 Light snow accumulations were noticed this morning, for Rockford the total was about .5". It has caused a few slick spots on untreated roads. But when it comes to snow totals, we're running low.
Up until last night, Rockford received only a half inch through the month of January. With the recent light snow, our monthly total is about 1"...but the average for this point in the month is 8.6"! That puts the area at a snow deficit of 7.6".

Accumulating snow through the next 7 days is also very low, we'll just keep scattered light snow showers through the next several days. Any accumulations will be minor through the start of next week. By the end of the month, in just a couple days, the monthly snow total average is over 10".

The Climate Prediction Center outlooks the southern half of the country, along with portions of northern Illinois with a 30-40% probability of drier than average conditions.

Posted by First Warn Weather at 8:12 AM