Big Chill Sets in for the Weekend 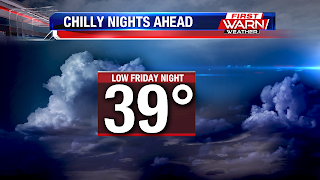 A series of cold fronts moving through the Midwest will bring more of a 'late fall' chill to the Stateline for the start of the weekend.

The first front came through Tuesday evening, bringing temperatures down from the low 80's Tuesday into the mid 60's Wednesday.  The second cold front arrives early Friday morning with another front quick to follow Friday afternoon.

There may be a few passing showers Thursday evening and early Friday, but following the cold front Friday afternoon a much cooler air mass arrives into the Stateline.  Cloudy skies and light showers will be likely Friday afternoon before a quick moving high pressure system sets in from the North.  The drier air will work to quickly clear out the cloud cover bringing temperatures down into the upper 30's Friday night, possibly bringing us our first frost of the Fall season Saturday morning.  Now, if cloud cover is slow to leave or we end up with a few showers that linger, then the likelihood of temperatures falling into the 30's won't be as high. 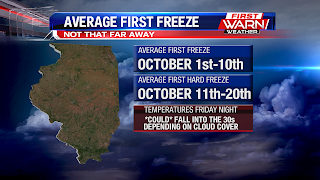