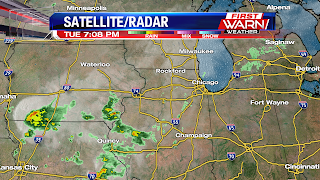 The heavy rainfall from Tuesday morning and afternoon has come to an end with only a few light showers and sprinkles remaining Tuesday evening.  Under mostly cloudy skies temperatures will remain in the low 60's during the overnight.  Unfortunately highs didn't warm as much as hoped, staying in the upper 60's and low 70's Tuesday afternoon. 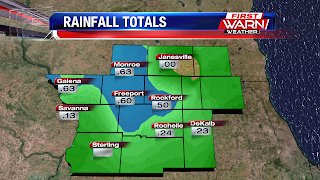 Rainfall totals Tuesday ranged anywhere from a quarter of an inch, all the way to an inch in some spots.  Additional rainfall Wednesday and Thursday may bring another one to two inches for northern Illinois and southern Wisconsin, with higher amounts to the northwest in Iowa and Minnesota.
Posted by First Warn Weather at 7:17 PM