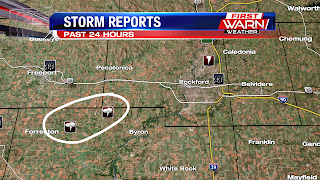 The overall severe threat was low Monday afternoon, but a stronger storm that moved through Ogle and Winnebago counties did produce two funnel clouds and a brief, weak tornado near Rock Cut State Park. The storm began to show signs of rotation near Adeline and Leaf River producing two funnel clouds, one of which was reported almost near the ground.

The storm moved over the town of Winnebago before lifting north of downtown Rockford.  It was north of Harlem and Perryville Roads near Rock Cut State Park where the report of the brief tornado occurred.  So far no significant damage has been reported.