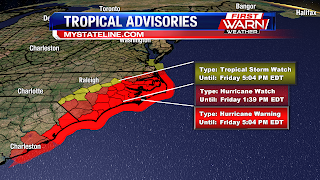 As of 4:00 PM CDT, Hurricane Florence remains a Category 4 Hurricane, only now her winds are back up to 140 mph with gusts upwards of 165 mph. Hurricane Warnings are now in effect for most of the North Carolina shoreline, including areas around the Outer Banks and Wilmington, North Carolina, down to Myrtle Beach, South Carolina.

Hurricane Florence is moving quickly to the west-northwest at 17 mph, which is a pretty good speed for a hurricane. However, Florence is rounding the base of a high pressure over Bermuda, which is partially the reason she is traveling at that current speed. However, while Florence may be moving fast now, she will begin to slow down as she nears land, and this will play a notable impact on her intensity.

As Florence nears land on Thursday, she will begin to slow down as an area of high pressure sits across the Great Lakes Region. This means that Florence will have to change her course slightly, but her forward momentum (and other atmospheric conditions) will want her to move forward instead of simply turning. What this means is that Florence will effectively hit the brakes as she nears land on Thursday, causing her effects to be felt along the coastline well before she actually makes landfall.

When a hurricane sits over waters for a long enough time, it begins to cause problems for her. She will expose herself to cooler waters churned up by her own surf, and this greatly effects a hurricane. Hurricanes love warm waters, and part of the reason Florence is as strong as she is right now is because she is sitting over warm waters. As she slows down, she will cause the waters below her to cool a bit, and this will impact her intensity.

Also adding against her is the presence of wind shear as she nears the coastline. Hurricanes like an atmosphere with little wind shear (that is, change of wind direction with height and speed), and currently she is in an environment with little wind shear. However, as Florence moves closer to the shorelines, she will begin to encounter shearing from the high pressure over the Great Lakes, as well as a stalled out frontal boundary just a little bit inland.

What does this mean for Florence? Simple, it means that she may actually weaken before she reaches land. Florence will likely intensify a bit more tonight and likely during the day tomorrow. But then she begins to slow down, and combined with the shearing, she will begin to weaken a bit as she heads towards land.

Now, Florence is expected to sit not too far off the coastline from Thursday until she makes landfall on either late Friday Morning or early Friday Afternoon. This means that places along the coastline will be exposed to high surf, gusty winds (we will get to that topic in a moment) and heavy rains. This means that there is the possibility that many places could see a couple of inches of rain before Florence even makes a landfall.

The other thing to keep in mind is that not all of the North Carolina is going to be seeing 140 mph winds. In fact, only a small portion of the hurricane contains these winds, and they are located within an "eyewall". An eyewall is located generally 40 miles or so out from the center of the hurricane, and this is where the strongest winds from a hurricane can be found. As Florence weakens, her wind field may expand a little bit, but as is the case with most hurricanes, the hurricane force winds are limited to a relatively small area.

Other hazards from Hurricane Florence include tornadoes, which is a common hazard with most hurricanes, especially major hurricanes. Lots of low level shear caused by the hurricane's rotation itself can cause thunderstorms in the rain bands to rotate, and sometimes they produce tornadoes. Hurricane Ivan in 2004 produced the most tornadoes from a hurricane numbering 120 confirmed tornadoes, but most hurricanes do not produce that many tornadoes, usually they produce a dozen or so. Nonetheless, they are still a possibility, and usually the tornadoes stay below EF3 intensity.

I will post further updates on Hurricane Florence around 8:30 PM this evening.