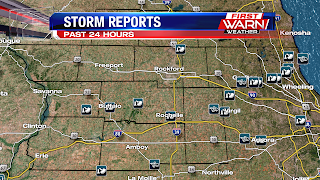 The Severe Thunderstorm Watch has been canceled for all of northern Illinois and southern Wisconsin as storms have been moving east towards Chicago and Indiana.  We have received reports of wind and tree damage across Ogle, Lee, Carroll, DeKalb and McHenry counties, with the most significant damage reported in Milledgeville.  There have also been reports of widespread tree damage across southern McHenry County. 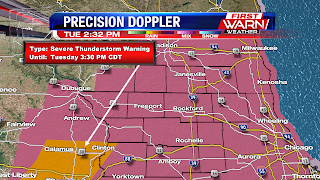 2:30pm Update: Severe Thunderstorm Watch issued for all of northern Illinois and southern Wisconsin until 10pm.  Severe thunderstorms moving into eastern Iowa have had multiple severe thunderstorm warnings and tornado warnings Tuesday afternoon.  Thunderstorms will increase in coverage between 3pm and 4pm for northwest Illinois and between 4pm and 6pm for Rockford.  Biggest threats will be damaging wind gusts, but an isolated tornado can't be ruled out - especially west of Rockford.

Once the cold front passes the storms will decrease in coverage later this evening. 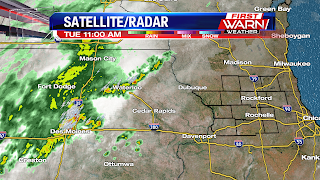 Satellite and radar shows showers and storms off to our west over central Iowa, and are working their way towards our neck of the woods. 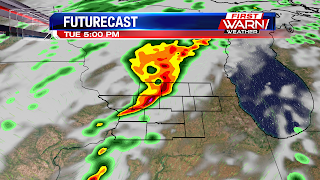 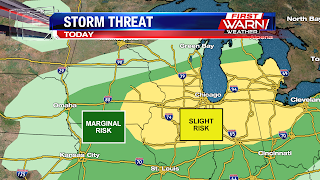 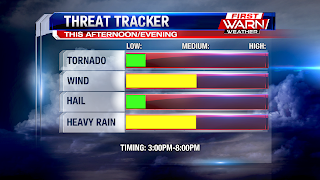 Some of the storms today will be potentially strong to severe. As a result, The National Weather Service's Severe Weather Prediction Center has placed the area under a slight risk for storms. On a scale of 1-5, a slight risk is a 2.


The main threat with today's storms will be the potential for heavy rain and gusty winds. Some hail and an isolated tornado cannot be ruled out, but it appears the best bet for any of that will be just to our east.

Posted by First Warn Weather at 11:51 AM