Local Rivers on the Rise 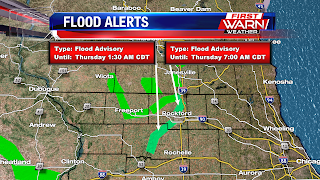 Flood Warnings and Flood Advisories continue for both the Pecatonica and Rock Rivers in northern Illinois and Southern Wisconsin.  A Flood Warning remains in effect for the Pecatonica River near Shirland through Monday evening.  Current river stage is at 12.2ft with flood stage at 12ft.  Minor flooding has been occurring, but the river is expected to fall below flood stage late Monday evening.

A Flood Warning will go into effect for the Pecatonica River near Freeport later this week.  Current river stage is at 12.4ft, and rising.  Flood stage is 13ft.  Minor flooding is expected later this week along the Pecatonica River in Freeport, especially the east side of town.  The river level is expected to rise to 13.1ft by Tuesday morning, just over minor flood stage.

A Flood Advisory remains in effect for the Rock River at Rockton, Latham Park and Byron.  While not expected to rise into minor flood stage, the Rock River is close in action stage, but is forecast to fall through the end of the week.

There isn't a lot of rain expected this week but showers and thunderstorms will add a little more water to the river basin of the Rock and Pecatonica Rivers.  There is another system by the end of the week that does need watching, especially if a stationary boundary sets up over northern Illinois and southern Wisconsin.

You can find the latest river levels, as well as any active Flood Warnings or Advisories here.
Posted by First Warn Weather at 8:25 PM