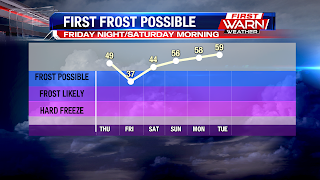 Temperatures will take quite the tumble Friday night into Saturday morning with the arrival of a strong high pressure system from Canada.

Mostly cloudy skies will persist Friday afternoon holding temperatures in the mid and upper 50's.  Light showers will be likely mid-morning Friday through early afternoon.  Drier air will move in by Friday evening helping to clear cloud cover by Friday night.  Dry air, clearing skies and light winds will allow temperatures to fall rather quickly Friday evening, and into the mid and upper 30's by Saturday morning.  Our first frost will be possible early Saturday morning, while a freeze could take place over central and northern Wisconsin. 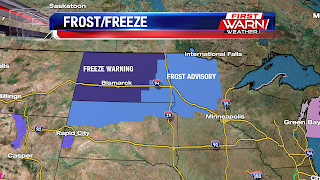 Already Frost Advisories and Freeze Warnings have been issued for parts of Minnesota, North Dakota and South Dakota.  With the growing season still ongoing, I would not be surprised if some sort of frost headline is issued for the Stateline Friday afternoon.

Temperatures will then begin their climb with southerly winds developing later in the weekend and next week.  This will push overnight lows back into the mid and upper 50's.  But there are some signs that point to an even colder air mass arriving towards the end of next week and next weekend.
Posted by First Warn Weather at 9:12 PM