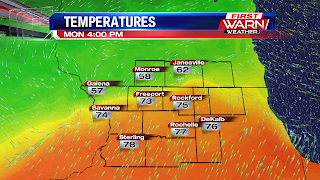 The weather pattern is about to become a little more active for the first week of October.  Skies were thick with cloud cover, drizzle and light rain showers Sunday afternoon, holding temperatures in the low to mid 50's for much of the day.  To the south, temperatures warmed into the 80's.  A frontal boundary lying across central Illinois will get pulled back north Monday as low pressure quickly moves across the Midwest. 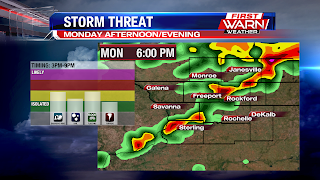 Increasing showers and isolated thunderstorms will occur for most across Wisconsin and northern Illinois Sunday night into Monday.  Some of the rain could be heavy across southern Wisconsin with a few locations receiving a half an inch by morning. The ongoing rain may initially slow the progression of the warm front, but it is expected to lift north between I-88 and Highway 20.  As it does temperatures will warm into the 70's, and possibly 80's, south of the front.  North of the front, temperatures will remain in the 50's and 60's. 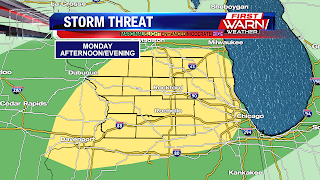 Increasing instability and wind shear (strong winds) in the atmosphere will prompt scattered thunderstorms to develop during the afternoon and early evening, with the highest coverage along and south of the warm front.  Damaging wind gusts and heavy rainfall are the biggest concerns, however, the amount of wind shear in the atmosphere may lead to an isolated tornado or two late Monday afternoon and evening.  Cloud cover and just how unstable the atmosphere becomes will be key in overall storm coverage, but the potential is there for big thunderstorms Monday.
Posted by First Warn Weather at 10:28 PM