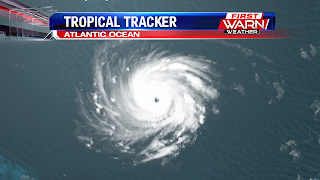 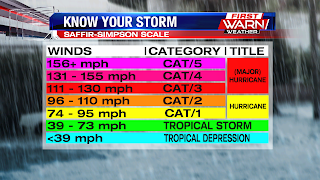 At 10:00 AM CDT, Florence's barometric pressure was at 962 millibars (mbs), however an hour later the pressure had plummeted to 946 mbs. This is a rather fast drop for a hurricane, especially given the amount of time in which it had occurred.

What does this mean? It means that Hurricane Florence is on track to become this season's most powerful hurricane (pending no other hurricane reaches this same intensity before the end of Hurricane season).

When a hurricane undergoes rapid intensification, it becomes "compact", resulting in a hurricane force wind radius that is rather small compared to the overall size of the hurricane. When the hurricane begins to weaken, the strongest winds begin to extend out further from the center (albeit, they are weaker than what they would be before the hurricane began weakening). Think of an ice skater (a hurricane) pulling his/her arms (hurricane force winds) inwards; the more the arms are brought inwards (a hurricane intensifying) the faster the skater spins (the winds of a hurricane), but notice how it is a small area. Conversely, when the skater extends their arms outwards (hurricane begins to weaken) the skater's spin slows down (the winds extend further out from the center, but are weaker).

So what can we expect from Florence over the next few days? Florence is expected to maintain her Category 4 intensity. Given the atmospheric lay out across the Atlantic Ocean, Florence appears poised to hit the southern shores of North Carolina. 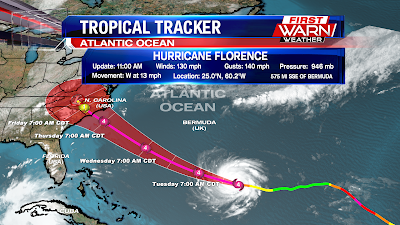 Is this a record? Well, it may be a record for the specific town that receives the land fall, but as we know the Mexico/U.S./Canada East Coasts are no stranger to strong hurricanes striking them.

Florence is currently moving westwards at 13 mph and is located roughly 575 miles southeast of Bermuda. Florence is expected to make a landfall in North Carolina sometime on Thursday.

At this time, no watches or warnings are in effect for the mainland U.S. with regards to Hurricane Florence.