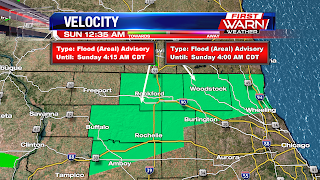 Flood Advisory issued for Winnebago, Boone, McHenry, Ogle, Lee and DeKalb counties until early Sunday morning.  Radar estimates of two to three inches of rain has fallen in those areas.  With additional rain and thunderstorms expected overnight, localized flooding will be possible. 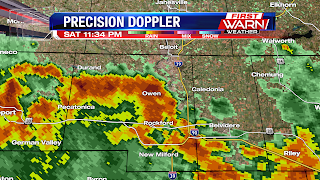 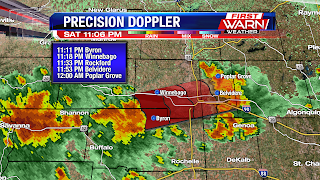 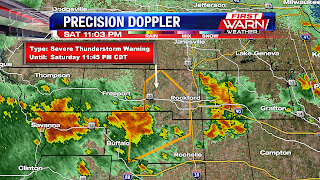 Severe Thunderstorm Warning for Ogle and Winnebago counties until 11:45pm.  Severe Thunderstorm is currently located north of Mt. Morris, near Forreston, and moving to the northeast at 35 mph.  Wind gusts to 60 mph will be possible.  Seek shelter, indoors and away from windows until the severe storm passes.

Additional strong thunderstorms over northwest Illinois are moving to the northeast and could produce wind gusts to 40 mph. 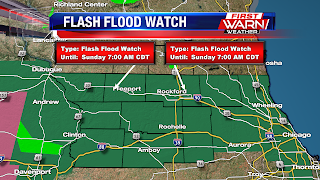 Thunderstorms have already developed, stretching from near Sterling to Genoa, Saturday evening with frequent lightning and heavy downpours.  The overall severe threat will remain low, but some of the stronger storms could produce locally strong wind gusts and small hail. 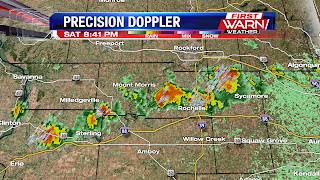 Stronger thunderstorms have been developing over central and southeast Iowa with numerous severe thunderstorm warnings, and even a tornado warning.  Look for storm coverage to increase across northern Illinois through Midnight, before shifting to the north by daybreak Sunday.  The heavy rain won't be something everyone in the area experiences, but where the rain does occur another one to two inches could occur.
Posted by First Warn Weather at 8:47 PM