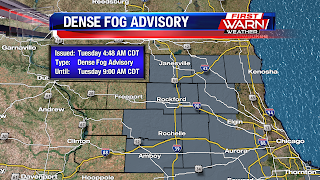 A Dense Fog Advisory has been issued for parts of southern Wisconsin and northern Illinois until 9am.  Visibility has fallen under one mile in many locations, especially south and east of Rockford.  Temperatures this morning have cooled into the upper 40's and low 50's, very close to the dew point temperature allow locally dense fog to develop.

As the temperature warms further from the dew 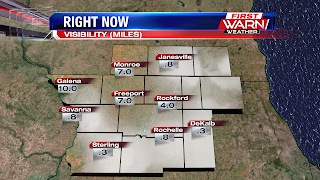 point temperature the fog should begin to evaporate shortly after 8am or 9am, leaving us with partly cloudy skies for the afternoon.
Posted by First Warn Weather at 6:10 AM