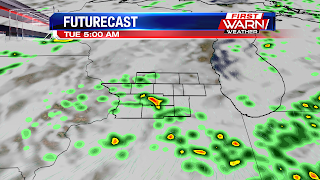 The Stateline remains sandwiched between two storm systems Monday evening - one passing to the southeast and another moving across the High Plains.  The storm system to our southeast is what brought the thick cloud cover overhead Monday afternoon.  Most of the moisture with this system has been to the east over Indiana and Ohio, but a few spots of drizzle and light rain will be possible into Tuesday morning. 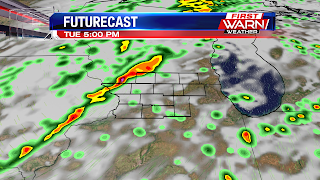 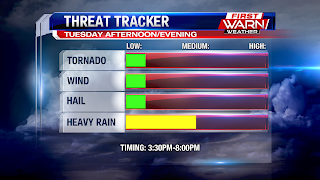 A stronger storm system will move into the Midwest on Tuesday, pulling a cold front through northern Illinois and southern Wisconsin as it does so.  Despite skies starting off mostly cloudy Tuesday morning, there should be enough moisture in place and strong winds aloft that will help sustain stronger thunderstorms late Tuesday afternoon and evening.  The cold front will pass through after 7pm Tuesday, with the greatest threat for storms occurring between 4pm and 8pm locally.  Damaging winds and hail would be the biggest concerns, but isolated tornadoes can't be ruled out - especially east of Rockford -  during the evening.

Be sure to stay updated with the forecast Tuesday, and make sure to have a way to receive watches and warnings should severe thunderstorms threaten the Stateline.
Posted by First Warn Weather at 9:50 PM