Early spring and late fall storm systems can be quite impressive, and the one affecting the Plains and Midwest is not disappointing. 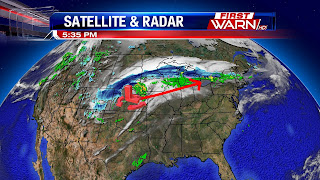 Low pressure in northern Kansas will continue to strengthen Wednesday night and move into Iowa by Thursday morning.  Ahead of the low, strong to severe thunderstorms have developed with heavy snow falling to the north and west.

Light rain will continue for northern Illinois and southern Wisconsin through the evening, although it will become more drizzle for some as the sun sets.  As the low out west moves closer overnight, the rainfall will increase in intensity after midnight with even the possibility of a few rumbles of thunder by dawn Thursday.

Colder air to the north in Wisconsin will allow for a rain/sleet mix as temperatures range between 32 and 35 degrees.  A little lull in the precipitation is possible as the low passes Thursday morning, but with the low now slowing down and not completely moving through northern Illinois until late Thursday afternoon, this will hold on to the precipitation a little longer.  Colder air will settle in behind the low during the afternoon with a transition over to snow after 2pm Thursday. 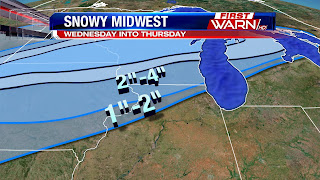 Snowfall amounts won't be much as the snow will be heavy and wet, but a narrow band of heavier snow is very well possible over portions of south-central and north-central Illinois that could accumulate to a few inches on grassy surfaces.

Forecast models have come into better agreement with this heavier band developing on the backside of the low pressure system.  It's still a question as to *where that band will actually set up.  Wherever it does develop, totals could very well end up within the 2" to 4" range.  Definitely something to keep a close eye on!
Posted by First Warn Weather at 5:48 PM