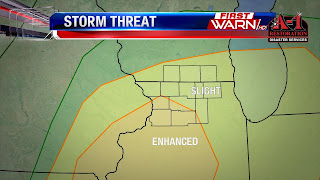 Noon Update:  The Storm Prediction Center enlarges the Enhanced area into southwest portions of Stateline. Large hail, strong winds, and isolated tornado possible in the late afternoon and evening tonight. Make sure to stay weather aware and have a way to receive watches and warnings if we get them. 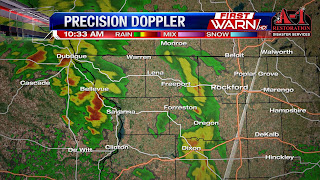 After a foggy Tuesday morning, it's now going to turn a bit soggy. Currently tracking a line of showers pushing east through Dixon, Oregon, and Winnebago. Another broken line of storms is currently developing west of the Mississippi but will also march east. This will affect Lena, Galena, Stockton, and Scales Mound. Pea sized hail is possible, occasional lightning, as well as heavy rain. However, these storms will remain below severe levels. You'll want to watch for ponding on areas roads however within the heavier downpours. 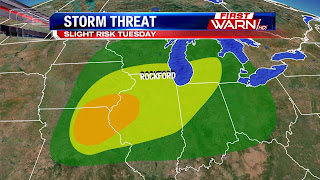 We will be watching late this afternoon but especially this evening for strong to potentially severe storms across northern Illinois and southern Wisconsin. The Storm Prediction Center has the Stateline highlighted under a 'slight risk' for severe storms, and has issued an 'enhanced risk' for western Illinois. The orange enhanced risk includes Peoria, Quincy, and Galesburg, and just northwest of Springfield. This is where storms will initiate around a developing low pressure system in northeast Missouri, southeast Iowa, and western Illinois. When storms are in their discrete cell state, there is a higher probability for them to produce a rotating updraft which in turn produces a tornado. Large hail will also be a concern in these storms. The storms will then march northeast into northern Illinois and southwest Michigan tonight. As the storms move, the will go from being in individual cells to more of a line in the evening, switching the threats to strong damaging winds and hail. We will be watching to see how long these storms hold in cells as they move northeast. If they hold together longer, that would bring a threat for an isolated tornado across the Stateline.

As it looks now, the greats concerns for the Stateline area will again be large hail, heavy rain, and strong winds. There is still a threat for a tornado in the area, however hail will be a greater threat. 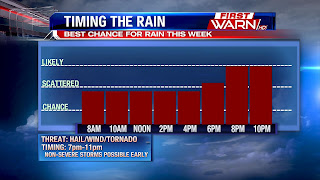 In terms of timing the storms, the time frame has been shifted back later into the evening, as of now storms look to form farther west then initially forecast. Storms look to form in the late afternoon and early evening west of the Mississippi in eastern Iowa and in western Illinois and move northeast. Best timing to enter the Rockford area will be between 7pm to 11pm this evening.

We still want to keep an eye on moisture levels and the warm front, because instability is tied to these two components. Instability is a key component in storm development, so if we don't have that it will be hard to see stronger storms.

The forecast confidence is high for thunderstorms this evening, but lower on the severe threat. Severe weather can still happen in March, so make sure you stay 'Weather Aware' and have a means to receive watches and warnings if they should be issued.