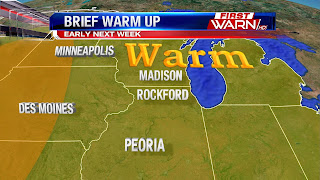 Easter is setting up to be showery, mainly from lunchtime through dinnertime. None of the rain will be particularly heavy, but it will likely be raining from the late morning hours through the early evening hours. We could see upwards of 0.1" to 0.3" of rainfall by Sunday evening, with higher totals towards Belvidere, DeKalb, Sycamore, Rochelle, and Elgin. Beyond Easter, we will be seeing a moderating trend in temperatures. In fact, it looks as though 60's are likely Tuesday and Wednesday with 70's not far to the west. 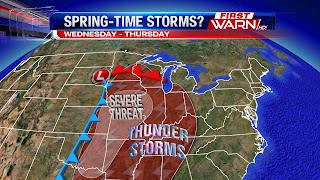 With the warmer temperatures will exist the threat of showers and thunderstorms on Wednesday and Thursday across portions of the Plains, Midwest, Mississippi Valley, Ohio Valley, and Great Lakes. Some of the thunderstorms that move through may become strong to severe, especially off to the south and west of the Stateline. The main threat of thunderstorms will be Wednesday late afternoon through early Thursday morning. The reasoning behind the threat of strong to severe thunderstorms is because we will have a strong cold front, a strong low, sufficient wind shear and instability, and plentiful moisture with dew points approaching 60°. 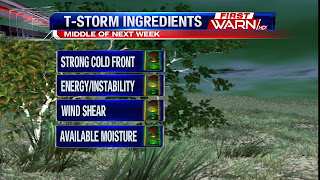 If we can pull more instability and wind shear into the region, we will have a higher chance of seeing severe weather. As it looks now, stronger storms are possible on Wednesday, but the higher severe threat will likely remain just to the southwest of the region. After the thunderstorms exit, some lingering rain is likely Thursday before temperatures cool down to end the week and ring in April.