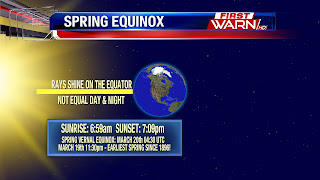 The first full day of Astronomical Spring began Sunday, March 20th.  But spring officially began late Saturday night - 11:30pm to be exact.  The earliest start to spring since 1896!  Wow!  And temperatures Sunday weren't all that bad.  Highs reached 46 degrees in Rockford, just three degrees below average.  For the remainder of March, the sun will rise before 7am and set after 7pm, helping temperatures warm as get closer and closer to the start of summer.

However, I think Mother Nature may have something different in mind this week for parts of the Midwest. Accumulating snow looks very likely close to the Stateline.  More on that in a later post!
Posted by First Warn Weather at 5:52 PM