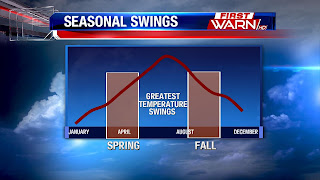 The spring and fall months are no strangers to great temperatures swings within a weeks time.  Take this week, for example.  Highs Tuesday and Wednesday will be reaching the 60's, if not low 60's.  But by the end of the week highs will have dropped into the 40's.

It's very common to get these types of changes during the week as the seasons change.  The atmosphere is trying to still balance itself out.  Coming out of the cold winter months, the warm air mass to the south is trying to retreat back north.  The larger swings in temperatures across the U.S. is what causes those large low pressure systems to form.  Since wind around low pressure flows counter-clockwise, southerly winds are drawn northward.  However, there is still enough cold air that often times follows the passage of the low that drops temperatures back down a few days later. 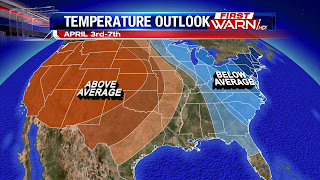 Eventually, as the temperature difference between the north and south balances out those weekly temperatures swings will also even out.  But until then, hold on. 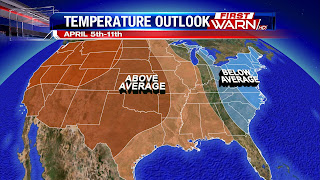 There is another shot of cold air that arrives over the Great Lakes and Northeast by this weekend.  But by the following week, warmer air out west gets pulled back east with temperatures warming close to and slightly above average.
Posted by First Warn Weather at 7:45 PM