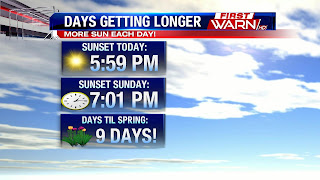 We have a lot to talk about in tonight's weather discussion! So let's get started. First of all, we had a beautiful Friday with plenty of sunshine warming our temperatures into the lower 60's. You may have noticed that sun stayed up until roughly 6 PM as well. Our days continue to get longer, and by Sunday evening we will see the sun set after 7 PM as we Spring Forward late Saturday night. So don't forget to set those clocks back and check the batteries in your weather radios and smoke detectors this weekend. More good news is that spring officially starts in less than 10 days! 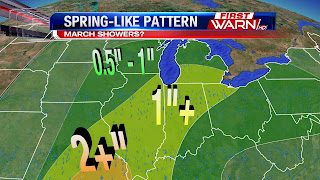 Sadly, sunshine won't be a very common occurrence over the next several days. We are monitoring two distinct weather systems that will each bring plenty of rainfall to the Stateline. The first wave of low pressure arrives late Saturday night and lasts through late Sunday night. It will bring off and on rain Sunday that could amount to nearly 1" by the time all is said and done. Heavier rainfall totals will be found south of the area. 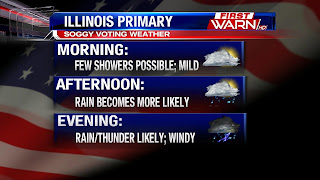 Monday looks mainly dry, but a second area of low pressure will develop and rapidly strengthen near the region Tuesday. As it does, rain will move in later on Tuesday. There will be a minimal amount of instability available on Tuesday, which could translate into a few thundershowers, but there is no threat for severe weather as it appears now. Tuesday happens to be the Illinois Primary. This means if you are planning on heading out to vote after noon, you will likely run into rain. The chance of seeing rain will increase through the day, so make sure to get out early, if possible! Another inch or so of rainfall will likely fall with this system. 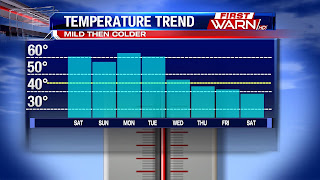 Temperatures will be an even bigger story as we head into next week as our recent spring-like warmth will be a thing of the past come Wednesday. An extended stretch of well-above average temperatures will come to an end as a result of a large dip in the stream forming by Wednesday. This will allow colder air to filter southward from Canada into the Midwest, Plains, Great Lakes, and Ohio Valley. Now it won't be brutally cold, but I do expect temperatures to return to normal levels, if not slightly below normal. Highs will likely stay in the 40's to round out next week and enter next weekend. Soak up the next four days of warmer temperatures if you are not a fan of the cooler weather!