Next Rain Threat Looms Next Week 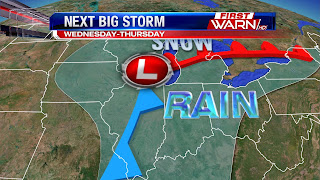 The last day of spring has delivered a reminder that it was technically still winter. Rain showers fell with temperatures in the upper 30's and lower 40's. Snow showers have been mixing in as well, especially Saturday evening as cooler air pushes in. Spring officially starts Saturday night at 11:30 PM Central Time, but the first day of spring won't feel as such. Sunday will be chilly in the 40's despite seeing some sunshine. Then our eyes will turn towards the middle of next week. This is when the next significant storm system could affect the Stateline.

A low pressure system will develop and move in on Wednesday. A warm front will likely set up near the Stateline, likely dissecting the region. 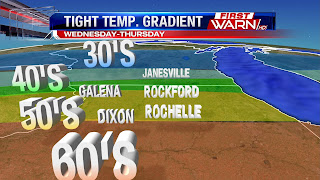 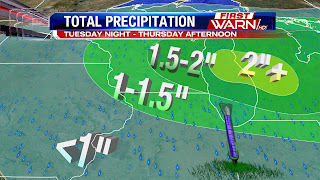 The rain will likely fall late Tuesday night through Thursday early afternoon. Some of the rain could be moderate to possibly heavy at times. All of the forecast models show the rain sticking around for that period of time, but they disagree on how much rainfall we could see. After taking into consideration all of the main weather forecast models, rainfall amounts will likely be in the 1-1.5" range by Thursday afternoon when the rain begins to wind down from west to east.
Posted by First Warn Weather at 9:36 PM