A fairly active, and slightly cooler, week is shaping up over Northern Illinois and Southern Wisconsin with the area being impacted by several low pressure systems.  The first is what's bringing us rain Sunday afternoon.

Rainfall totals haven't been much with most receiving under 0.40" through Sunday evening, but it's been a pretty steady rain. 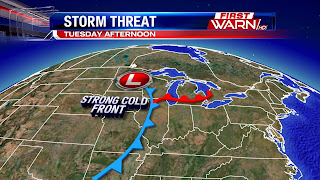 The next low will have a little more punch to it and is expected to arrive Tuesday.  This one is currently in the Pacific Northwest and will move into the Central and Northern Plains late Monday.  A warm and moist air mass will be pulled northward into the Plains and Midwest Monday with thunderstorms possible over the Dakotas, Minnesota and Iowa Monday afternoon.  A few of those storms could sneak into Northwest Illinois late Monday night.  However, any threat for severe weather is expected to remain low.

Ongoing showers will be likely by Tuesday morning with skies possibly drying out by the afternoon.  As the low pressure system pulls into the Upper Midwest Tuesday afternoon, a strong cold front will sweep across Wisconsin and Illinois.  Ahead of the front, dew points (moisture) nearing 50 degrees - which is high for this time of year - will be pulled northward into Central, and possibly Northern Illinois. 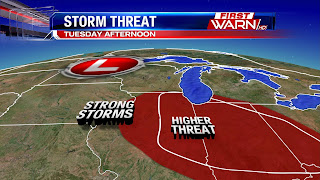 There remain some differences in key features Tuesday in terms of front and low pressure system placement, which would ultimately have an impact on where the greatest likelihood of strong thunderstorms would develop.  As of Sunday evening, it appears as if the development of thunderstorms would be favorable along and east of I-39 Tuesday afternoon between 3pm and 6pm.  Either way, the Storm Prediction Center has highlighted most of Northern Illinois under a slight risk for severe weather Tuesday afternoon
and evening.  With Tuesday being Illinois Primary day, I really want you to pay close attention to the forecast.  Make sure if you're going to be out, you know where to go in the event severe weather does occur.  And make sure you have a way to receive watches/warnings if you're away from home.
Posted by First Warn Weather at 6:36 PM