****ALL STORM REPORTS WILL BE FOUND BELOW*** 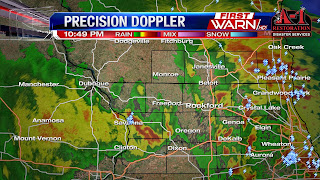 Additional showers and non-severe thunderstorms will continue into the overnight as the low pressure system moves through Northern Illinois.  Can't completely rule out small hail with the stronger showers, but our severe threat has ended.
﻿ 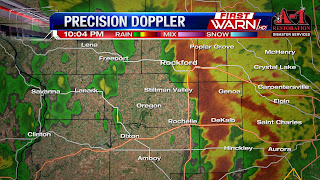 Severe threat is winding down this evening for the Stateline.  Heaviest rainfall has shifted just east of the downtown Rockford area, but will continue to affect Poplar Grove, Belvidere, Creston, Malta, Kingston, Kirkland, Genoa, DeKalb and Sycamore.  Severe weather is not expected, but pea sized hail is likely with the heavier rainfall. 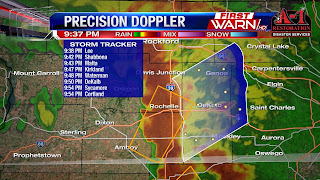 Cities in the path of the severe thunderstorm warning. 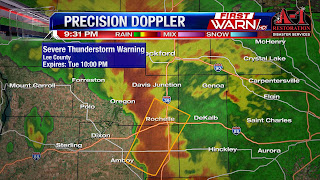 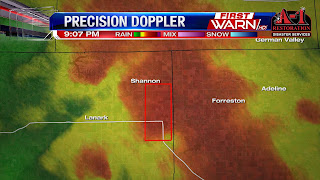 Tornado Warning has been canceled for Lee County, but continues for Carroll County until 9:30pm.  Storm in Carroll County is near Shannon and moving Northeast around 25 mph.  This is radar indicated, but if you're near Shannon, IL take shelter immediately. 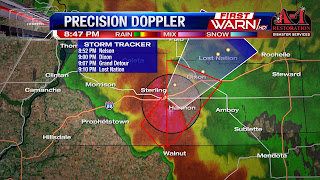 Tornado Warning for Lee County until 9:15pm.  Storm is currently located near Harmon and moving Northeast around 45 mph.

﻿
Tornado Warning has been canceled for Carroll County.  Currently no active warnings for the immediate area. 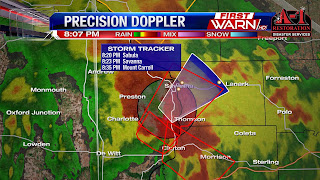 Tornado Warning for Carroll County until 8:30pm.  Storm will be near Savanna around 8:20pm and Mt. Carroll near 8:30pm.  If in it's path take shelter immediately!  This is a confirmed tornado near Andover, IA.  Storm is moving Northeast around 35mph. 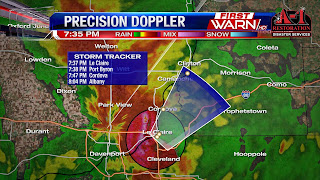 Tornado Warning for Whiteside County until 8:15pm.  Tornado confirmed over Rapids City, IL and moving northeast at 30 mph.  If you are located in this area, take shelter immediately. 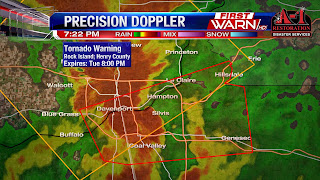 Tornado Warning for Rock Island County until 8pm.   This storm is right where the warm front and low pressure system are coming together.  The current storm is moving east and will likely ride along where the warm front is - which is currently near/just south of I-88.  If warm front remains stationary and doesn't move north, greatest tornado threat will continue south of the immediate area.  Closer for counties near I-88.

Merging storm cells could lead to flooding rainfall this evening over parts of eastern Iowa and northwest Illinois. 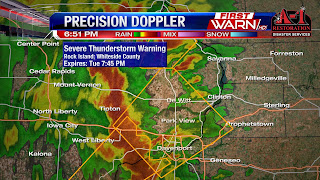 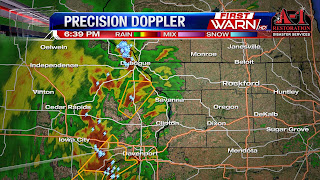 However, I am watching thunderstorms in eastern Iowa for the potential of a few stronger ones to cross over into Jo Daviess and Carroll counties within the next 30-45 mins.  A couple of them do have severe thunderstorm warnings. 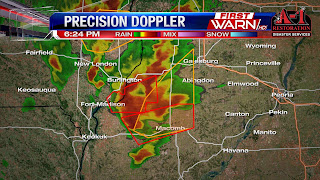 6:25pm Update: Tornado Warnings continue in west-central Illinois, closer to the surface low and in an area with higher instability. 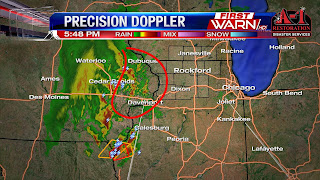 5:35pm Update: Severe thunderstorm and tornado warnings have been issued closer to the Iowa, Missouri and west-central Illinois borders - following in line where the better instability has been all afternoon.

There are additional showers and isolated thunderstorms (non-severe) forming in eastern Iowa that I believe will cross over the Mississippi River by 7pm, before what's developing to the south moves in.   Still looks like our greatest storm potential will be between the hours of 7pm and 10pm this evening.

4:45pm Update:  Storms have started developing over Northeast Missouri and West-Central Illinois late Tuesday afternoon with full sunshine and better instability.  The warm front is edging closer and closer to Northern Illinois with temperatures south of Sterling in the low 70's, 66 degrees at Sterling and still 59 degrees in Rockford.

As the warm front slowly shifts north through the evening, storms near the Quad Cities will shift into Northwest Illinois by 6pm and 7pm.  The earlier the storms develop, the higher chance for large hail and isolated tornadoes. 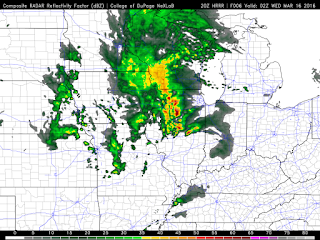 After 7pm, storms will then likely spread east over Stephenson, Winnebago, Ogle and Lee counties between 8pm and 9pm.  The image to the left is a simulated (future) radar image over Northern Illinois.  I still believe our biggest threat will be hail, but wind and isolated tornadoes can't be ruled out.  However, as the sun sets tonight the available moisture and energy may be weakening just a little.  Definitely something to keep an eye on over the next couple of hours and remain 'Weather Aware'. 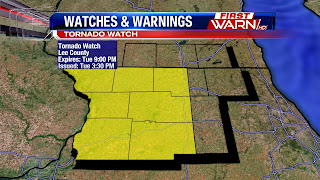 IMPORTANT UPDATE: 95% chance that a tornado watch will be issued for parts of the Stateline later this afternoon.  Stay 'Weather Aware' and keep a watchful eye to the sky, especially closer to sunset and after!

Technical discussion from the Storm Prediction Center found below: 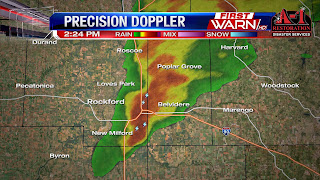 A line of non-severe thunderstorms have been moving over Northern Illinois with reports of pea to nickel sized hail from German Valley to Rockford and Belvidere.  This line is currently moving to the east around 30 mph.  Heavy downpours are going to be the greatest threat, followed by small hail.

Clearing has been taking place south of the area, with a few clear pockets developing over Northern Illinois as well.