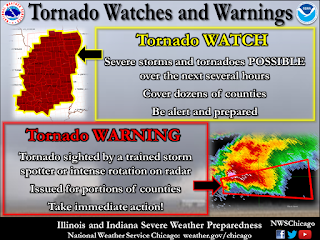 This week is severe weather preparedness week in Illinois.  Our goal is to help increase awareness of severe weather within the public, and to remind you to review your weather safety procedures at home, work, school, place of worship, on the road and elsewhere.  Severe weather can strike any day, time and month of the year and it's important to have a safety plan in place and practice that plan on a routine basis.  And if you don't have a plan, now is the time to act.

Earlier this week, on Tuesday, was the statewide tornado drill.  You probably heard the sirens, had your weather radio go off and even saw the alert come over your TV or hear it over the radio.  And while you might not have acted during that drill, I hope it got you thinking about what you would do in the event severe weather - thunderstorm or tornado - were to occur where you were.  Where would you go?  What would you do?

April 9th, 2015 should serve as a great reminder that large and destructive tornadoes can, and in fact do, happen in northern Illinois.  They are not very common, but they do happen.  Severe weather in Illinois usually occurs between the months of April and June.  But as history shows us, large tornadoes can occur in the 'off' season as well.  The January, 2008 Poplar Grove EF 3 tornado and the November 22nd, 2010 EF 2 Caledonia tornado.  Also, the severe weather outbreak on November 17th, 2013 when an EF 4 tornado ripped through the town of Washington, IL on an early Sunday morning.  Those three examples prove that severe weather can occur any time during the year.

The most favorable time for tornadoes is between 3pm and 10pm, usually due to the heating of the day.  However, severe weather at night is often the most dangerous and frequent with damaging winds and flash flooding.

So before the week is up, sit down with your family and develop a severe weather plan.  Just like you may have a fire plan for your home, develop that same type of plan for severe weather.