With Tuesday being Primary day in Illinois I know many Stateliners will be out and about on Tuesday. We won't see rain and storms the entire day, but we do look to see rain in the morning and again in the afternoon.

Not much in the set up has changed since the previous post, we are still watching a developing low pressure system that is currently positioned in the northern Rockies. This low will head east and move into the Midwest on Tuesday. Ahead of that low, Tuesday morning, we look to see a line of showers moving through. The time frame for this would be around 8am through the late morning. We will then dry out a bit around lunch with then the threat for thunderstorms ramping up for the afternoon. 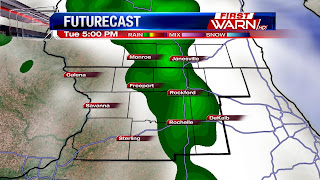 As of now, the best time frame looks to be in the late afternoon and early evening for stronger storms to be possible. This would be around 3pm through 7pm Tuesday as a cold front moves east across the region. Storms look favored to develop close to the Mississippi River just ahead of the cold front and then head east.

If you are planning on voting tomorrow, as of now the best timing to do that would  be earlier in the day with the threat for storms centered closer to the evening commute home. 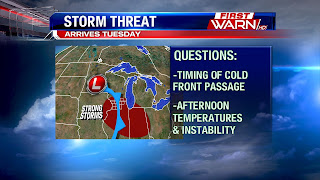 However, there are still questions regarding the system as we are still about 24 hours out. One question is the timing of the cold front, if it arrives later in the day, the storm threat would shift more to the east of us. We will also be watching what happens earlier in the day on Tuesday. If rain were to move through in the morning and we can't get any of the clouds to clear, this would also hinder the storm threat later in the day. Instability is tied to the warmth we are able to get in the afternoon and our temperatures. If we can't get our temperatures up or any sunshine it will be harder to get instability to come by, and again would lower our threat for storms. 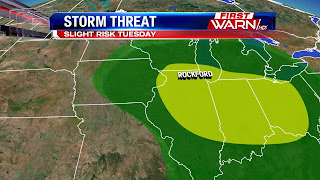 I did want to mention that the Storm Prediction Center does have northern Illinois and southern Wisconsin highlighted under the 'slight risk' for severe weather. This is not set in stone, but tomorrow will definitely be a day to keep your eyes to the sky and have a way to receive watches and warnings should we get them.

We will continue to update the forecast as we get closer, so make sure you check back with the First Warn Weather Team for updates.