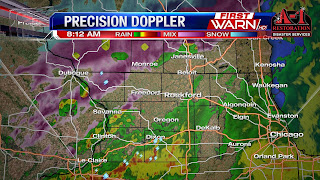 Messy morning for some with temperatures hoovering at the freezing mark north and west of the Rockford area and in the mid to upper 30's across the rest of the area. This is allowing for freezing rain and sleet in northwest portions of the area and then tracking thunderstorms to the south.


Green, Rock, Jo Daviess, and Stephenson counties have been placed under a Winter Weather Advisory. For northwestern Illinois that will be in effect through noon, Green County in Wisconsin will expire at 1pm and Rock County's advisory expires at 4pm. 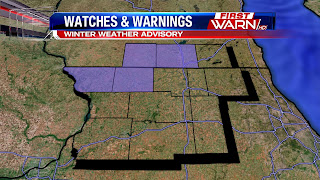 The advisories for far northwest Illinois are in place for sleet and freezing rain that is falling and will allow for slick areas on some roads. Also will be watching for this to switch to all snow into the early afternoon and we will see a couple inches accumulate on grassy and elevated surfaces. It will be slushy on roads but will still be creating slick roads. 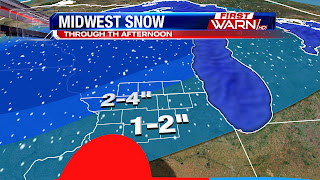 Expect rain and a rain sleet mix as we head through the mid to late morning. As low pressure moves east across northern Illinois today, cold air wraps in behind the low and this will allow a change over to all snow from west to east. A few cities and towns will see a period of heavier snow within a convective band that will set up, and will allow for some locations to see a few inches accumulate.  Snow then ends from west to east in the late afternoon

In general, the Stateline will see a couple inches of slushy snow accumulate around the area. However a convective band of snow also is forecast to set up near the Stateline. Within this band 2-4 inches of snow is possible. However, this is not something the entire area will see, but more so locally for a few cities.

Posted by First Warn Weather at 8:26 AM