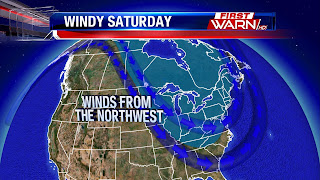 Several cold fronts will move through the northern tier of the country over the next week.  The first one came through today, bringing thunderstorms earlier this afternoon.  The second one arrives Friday bringing with it a few more showers and isolated storms (non-severe) for the afternoon.

This second front, though, will pull down a colder air mass over the Great Lakes and also provide very gusty winds during the afternoon 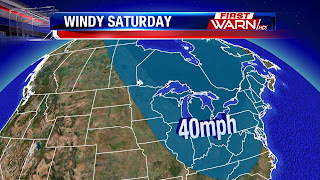 Saturday.  Winds all throughout the atmosphere, from the surface to the jet stream, will be positioned from the northwest.  This combined with the cold air will cause winds to gust as high as 40-45 mph over the western Great Lakes.  There will also be a few showers during the first half of the day, with snow flurries possible over Wisconsin.

The chill won't last because winds will quickly shift around to the southwest Sunday allowing temperatures to warm into the low 50's.  The third cold front will arrive Sunday night with yet another chance for showers into next Monday morning.
Posted by First Warn Weather at 6:38 PM