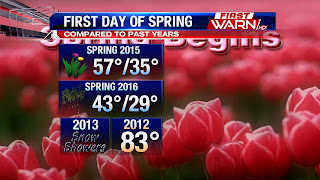 We are now less than two days away from the official start to spring. If you look at the forecast for the next few days you probably wouldn't guess that, however. When spring begins on Sunday, highs will likely only reach the lower 40's. Last year on the same day we saw temperatures warm into the upper 50's. In fact, going back a few years to 2013, we actually recorded a "trace" of snowfall at the airport. If we go back one more year to 2012, the first of spring featured temperatures in the lower 80's believe it or not! 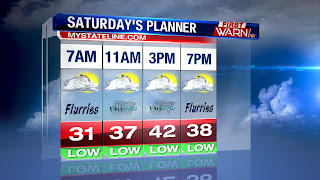 While we will be nowhere near the warm extreme, temperatures will be cold enough early on Sunday morning to support a few snowflakes. Snow is not in the forecast, but that just goes to show that we will be much closer to the snowy end of the spectrum as opposed to the very warm end of the spectrum this year. The last day of winter is shaping up to be rather wintry with highs only in the lower 40's under a cloudy sky. In fact, a few light showers or snow flurries cannot be ruled out at just about any point during the day. Sunday won't have any precipitation, but we will again struggle to get above the lower 40's.
Posted by First Warn Weather at 8:30 PM