Building heat brings big thunderstorms over the Midwest and Plains 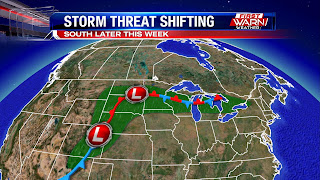 Severe thunderstorms moved through Minnesota and Wisconsin early Sunday morning and have stayed up north most of the afternoon and evening.  In fact, so much hail fell around the Twin Cities that the City of Coon Rapids had to bring out their snow plows just to clear the roads! 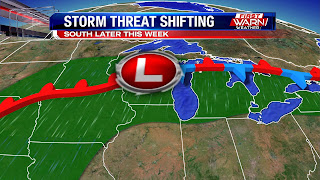 Thunderstorms are forecast to redevelop over the eastern Plains and Iowa with strengthening winds in the lower level of the atmosphere Sunday night.  Most of this storm activity will remain north of the Stateline, but with a stationary boundary ever so slightly shifting south through Wisconsin it's possible a few of those storms may shift south as well and affect southern Wisconsin early Monday morning.  A more likely scenario will be a chance for thunderstorms Monday evening and Monday night with a cool front moving south near Madison by Tuesday morning.  That front doesn't move far Tuesday with the most active part of the jet stream shifting south as well.

Low pressure will then shift east pulling a cold front closer Tuesday night and Wednesday.  Thunderstorms will be possible Wednesday afternoon and then again Thursday with another front close by.  It won't be until this upcoming weekend that a stronger cold front will move through Saturday giving us a break from the heat and humidity by Sunday.
Posted by First Warn Weather at 8:01 PM