Storms out west could move through northern Illinois Thursday night 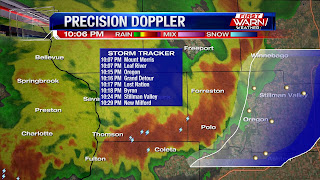 10:05pm Update: Line of strong thunderstorms moving into Ogle and Lee counties.  Dime sized hail and wind gusts to 50 mph are possible.  Heads up for the cities highlighted. 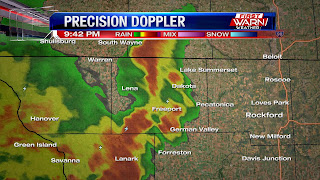 9:45pm Update: Thunderstorms with frequent lightning moving in from the west from Monroe to Lanark.  Small hail and a few stronger wind gusts are possible, but overall severe threat remains low. 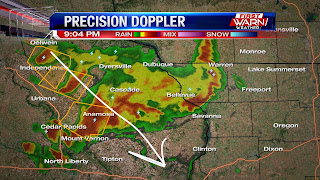 9:10pm Update: Severe thunderstorms continue to move into northeast Iowa, but are moving more southeast than east.  This is where better instability is located.  Storms a bit further north will still pose a hail threat as they become elevated, but overall severe threat for northern Illinois and southern Wisconsin will remain low. 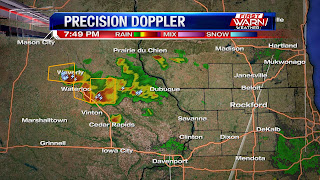 Despite a cold front passing Thursday afternoon, high temperatures still made it into the upper 80's and low 90's.  It wasn't as humid, but it was still very hot!

With the front to the south the majority of the afternoon and evening will be very quiet.  Big thunderstorms are developing over the central Plains, closer tied to an area of low pressure.  But thunderstorms developing over northeast Iowa bare some watching as they are likely to move into northern Illinois after 9pm tonight. 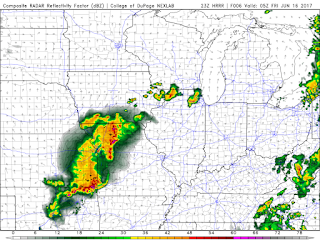 The image on the left is a 'simulated radar' image of what the radar may look like (future radar) around Midnight.  The storms will weaken a little as they move into Illinois due to loss of daytime heating, but there will still be quite a bit of instability in the atmosphere during the overnight.  This may help overcome the loss of heating and keep a few stronger storms around that would be capable of producing large hail and wind gusts to 60 mph.  The storm threat will last through roughly 2am/3am Friday morning.

Additional thunderstorms - some likely severe - are possible going into the weekend.  I'll have more on that coming up in a later post.