Storms this Evening with Nicer Weather On the Way 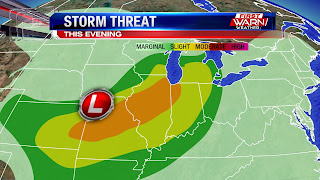 We had a decent start to the day with a few breaks in the clouds that allowed for some sunshine, but unfortunately those breaks in the clouds got our temperatures to heat up a little bit more and develop some isolated storms and showers.  Our instability has increased since 4pm as an upper-level trough has dipped just west of us, increasing lift over our area.  This is why we're seeing more thunderstorms developing, and is also why we're under a Slight Risk for severe weather.  The only county not under a Slight risk is Jo Daviess, which is just under a Marginal Risk.  The Enhanced risk was shifted to the south into central Illinois, where large hail and tornadoes are likely.  Any storms that form down there will track northeast, and will avoid the Stateline.

The storms moving through our area aren't severe, but with our increasing instability we can't rule out the chance for a little bit of hail to be seen with these storms, and some gusty winds.  The storms are expected to die down between 1-4am, when the frontal boundary moves southeast.   Afterwards we'll stay fairly cloudy for the rest of the overnight.

Father's Day is looking to be a beautiful day!  We'll have temperatures in the upper 70°s with partly cloudy skies, so be sure to get out and enjoy the nice weather.  Some clouds will build up on Monday with an approaching low, but a high will move in on Tuesday to clear them all out.  Another low pressure system will move in Wednesday, bringing us a chance for storm during the evening, with a third low pressure system bringing rain during the overnight Thursday night.  The third low will also bring us a rain chance during Friday afternoon, before bringing a storm chance during the overnight Saturday night.  Despite the couple of storms and showers next week, temperatures will be back in the 80°s by Wednesday, climbing to the mid 80°s by next Saturday.