Stormy Weather on the Way 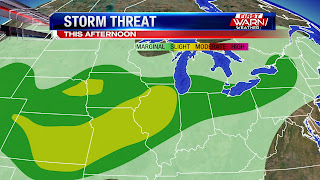 We had a nice start to our Thursday with the clouds breaking up and allowing for sunshine.  This was a great relief after what we had last night.  Thunderstorms are expected to return between 1-4pm, as we are under a Slight Risk for severe weather.  Hail is expected with some of these storms, but only up to quarter-sized.  We can't rule out a few strong wind gusts, which would top out at 40 mph.  The storms are expected to die down around 10pm, with rain lingering afterwards.

A low pressure system off to the southwest will make its approach and bring in warmth and moisture, allowing for thunderstorms to have plenty of fuel.  Dew points are expected to be in the mid 60°s to low 70°s, with any dew point temperature in that range capable to producing tall thunderstorms.  Because of their height, that brings the possibility for some hail.  This low will bring thunderstorms for the afternoon on Friday as well, but these will only be isolated and aren't expected to be severe.

The low moves out Saturday, where we'll get a break from the storms with partly cloudy skies and temperatures in the low 80°s.  However, another low will move in Sunday and bring some isolated storms during the evening.  Afterwards we'll have a string of days consisting of isolated thunderstorms, and unfortunately the Fourth of July is included in that.
Posted by First Warn Weather at 10:19 AM