A Few Too Many April Showers

April has seen plenty of showers... in fact, too many showers. Fortunately, the forecast is looking much dryer over the next seven days. 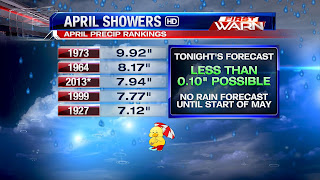 As of Wednesday, this April has been the third wettest on record for Rockford with close to eight inches of total rain. Over half of that (4.68") fell between April 17th and 18th. The forecast is calling for a light mix tonight before drying out the rest of the month, meaning there's little chance of moving any further up the list.