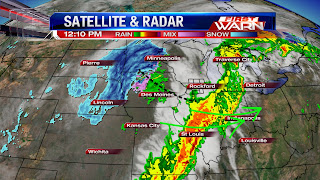 Rainfall totals from Wednesday to today across northern Illinois have ranged between 3" and 4" with slightly less amounts falling north across Wisconsin.  The heavy rainfall from this morning has ended with only a few showers, and possibly a thunderstorm, expected this afternoon. The majority of Flash Flood Watches have been cancelled, but Flood Warnings continue for the Rock, Pecatonica and Kishwaukee Rivers along with Flash Flood Warnings for DeKalb and Lee counties until 8pm this evening.  Flood Warnings for Urban areas and small streams continue for Boone, Lee, McHenry, DeKalb, Ogle and Winnebago counties until 7:30pm.  Emergency management officials have reported flooding across these areas.

Any additional rainfall today should remain under half an inch.  Ongoing thunderstorms through Michigan, Indiana and central Illinois will continue to move east as low pressure lifts out of Iowa and into northern Illinois this afternoon.  Cloud cover will help keep the atmosphere fairly stable despite the strong lift with the low and should any stronger storms develop they will remain east and south of the Stateline. 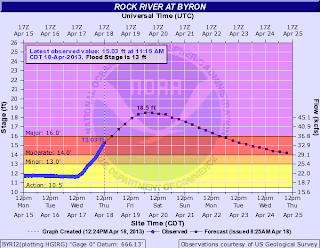 Of bigger concern is the ongoing flooding across north-central Illinois.  Several locations along the Rock River have reached moderate flood stage with expected rises to continue into the weekend.
Current river observation for the Rock River at Byron show the rise in the river from yesterday to today.  Current river level at 11:15am is  15.03' with higher end moderate flooding already occurring.  Major flood level is 16' and the forecast calls for the river to rise to 18.5' and crest Saturday afternoon with major flooding. 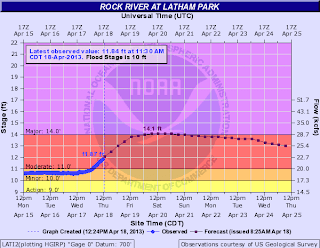 Current river level of the Rock River at Latham Park, in Machesney Park, is 11.84' with moderate flooding occurring.  The river is expected to crest at 14.1' Saturday.  Major flooding is expected over the weekend and into early next week. 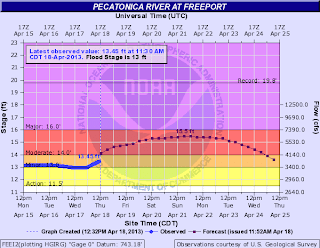 The Pecatonica River in Freeport is currently at 13.45' and is expected to crest Sunday at 15.5' pushing the river into moderate flood stage.   I wouldn't be surprised to actually see the crest levels rise over the next day to higher levels as water continues to runoff into the rivers.  Once past the weekend the rivers will remain very elevated with only a gradual decrease by the end of next week.