More heavy rain? What the past can tell us

The month of April has been anything but dry and is now the 3rd wettest April on record for Rockford.  Leading the group was April 1973 where nearly 10" of rain fell. 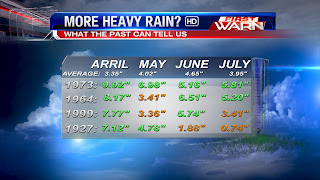 David Martin emailed me Thursday morning asking a very good question.  He said: "How much rainfall did we get the following months of May, June and July of the wet April years?  Did any of the following months stay wet or did they dry out compared to the monthly average".  Looking back the months that followed in 1973 remained above average; in fact, well above average.  The overall spring that year received 21.43" of rain making it the wettest spring on record for Rockford.  The second wettest April was 1964 when 8.17" of rain fell during the month.  May that year was a little drier than normal but the precipitation ramped back up during the months of June and July.  When looking at some of the other data it's likely that at least one, if not two or three, of the following months will experience above average precipitation.  It's not likely we'll have a repeat of the drought that occurred last year, but we may continue with the cooler and slightly wetter pattern for the first couple weeks of May.
Posted by First Warn Weather at 9:24 AM