Next Week's Temps Up In The Air

The models are having a hard time figuring out what is going to happen to the Stateline next week. While they all generally agree it's going to be a soggy week, temperatures are a BIG question mark.

Looking at two of the bigger models shows why there is such confusion. The GFS (or American) model has an area of low pressure swinging to our north next week. That would allow warmer air to move into the Stateline ahead of that system. The European model, however, keeps that same low to our south, meaning we would stay on the cooler side of the system.


That difference between north and south makes a huge difference in projected temperatures.While the GFS has us in the 70s on Tuesday before a cooldown in the 50s, the Euro has highs mired in the upper 30s and low 40s for most of next week. 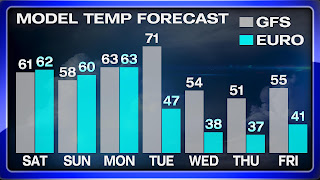 This is a good news, bad news situation. The good news is we will probably not dip into the 30s next week. The bad news, though, is that 70 doesn't look likely, either. With rain chances starting Monday and going through Thursday, look for highs next week to stay in the upper 40/low 50 range.
Posted by First Warn Weather at 7:38 PM