The science behind all the rain

Here's a break down of the current Flood Warnings, Watches and Advisories:

Flood Warning:
Rock River at Byron from late Friday night through Monday evening.  Current river stage is at 10.1' - flood stage is at 13.0'

Flood Warning:
Rock River at Rockton from Thursday afternoon until further notice.  Current river stage is at 8.5' - flood stage is at 10.0'

Flood Warning:
Pecatonica River near Shirland from Friday afternoon through Tuesday morning.  Current river stage is at 9.4' - flood stage is 12.0'.  Minor flooding is expected to occur. 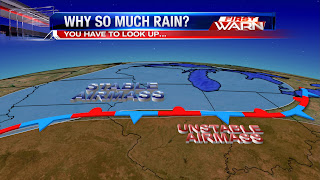 Already two day rainfall totals have exceeded 2" in some locations and after this morning's 1"-2" of rain there could be an additional 2" that falls tonight!  As the rain coverage increases this afternoon so does the threat for flooding and numerous Flood Warnings, Flood Watches and Flood Advisories have been issued for all counties in N. IL and S. WI except for Boone and DeKalb counties (those may come later for the Kishwaukee River).

So, why all the rain?  It's not like it's been muggy and warm the past two days.  To answer that question you have to look up in the atmosphere.  When forecasting any chance for rain or thunderstorms a meteorologist not only looks at what's going on at the surface but what's happening above our heads.  At the surface there has been a stationary boundary bisecting Illinois, Iowa and Missouri the past couple of days with 40° weather north of the front and 70° weather south of the front.  In order to get strong & severe thunderstorms you need the heat and humidity.  We haven't had that here, but yet we still had stronger storms move through the past two mornings.  Why?  Well, there has been warm & humid air in Northern Illinois and Southern Wisconsin, it's just been a few thousand feet above us.  The warm air south of the front was lifted over top the cool, stable air at the surface and was able to utilize some of the unstable air aloft to produce elevated thunderstorms. 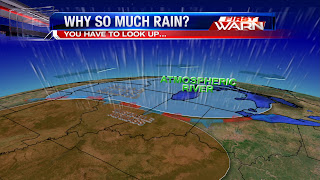 Jet stream winds have been moving from southwest to northeast across the U.S. pulling in a moisture rich air mass from the Gulf of Mexico.  Even though the surface warm front has been well south of the Stateline an upper level warm front - roughly at 3,000ft - has been very close to the Wisconsin/Illinois border.  This sets up a favorable pattern, or atmospheric river, for the gulf moisture to move within the jet stream and fall across Wisconsin and Illinois.  It's also being aided by several upper level disturbances moving through the Plains and Midwest.  Until the jet stream pattern changes we'll continue to experience round after round of heavy rain; even though the air mass if fairly stable at the surface.  Don't worry, there is an end in sight.  The main low pressure system will swing through Thursday morning shifting everything to the east across the Ohio River Valley and Northeast.  A brief break from the rain will occur but we could have a similar pattern set up once again early next week.
Posted by First Warn Weather at 1:06 PM