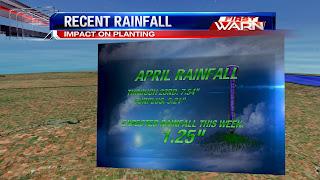 Both the Rock and Pecatonica Rivers continue to recede after cresting over the weekend.  Flooding concerns will continue through the end of the week until river levels are expected to drop below flood stage.  Not only has the recent rainfall had residents who live along the river on pins and needles, but it's also becoming a little concerning for area farmers.  Usually by this time in April we should start to see the beginnings of what would be the planting season.  In fact, corn planting usually begins around the 20th of April, depending on weather conditions, and soy bean planting within the first week of May.  The nearly 3"-5" of rain that was experienced last week has had some local farmers becoming a little concerned with when they'll be able to get into the fields. 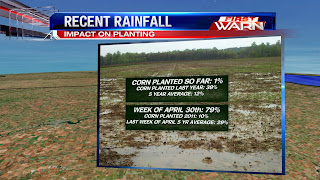 I spoke with Bruce Johnson with the Stephenson County Farm Bureau earlier Monday morning and he said according to the weekly crop report (published every Monday) throughout the state of Illinois only 1% of the corn crop had been planted and that was downstate.  No one in northern Illinois has been able to get out in the fields due to the ground being so wet.  This compared to the 38% that had been planted around this time last year.  An average of the past 5 years shows that usually by this time in April 12% of the corn crop is planted with an increase during the first couple weeks of May.

Due to the extreme warmth and dry weather northern Illinois experienced last year by April 30th nearly 79% of the corn crop had been planted!  That just goes to show how unusual the spring of 2012 was.  Over the past five years 29% of the crop is typically planted by the last week of April - and that percentage increases during the month of May.  There still remains some time for farmers to get out into the fields within the next couple of weeks without it having much of an impact on yields come fall, however, we need a good one to even two weeks of relatively dry weather to allow time for the fields to dry and warm and with another possible half inch to inch of rainfall expected Tuesday, the time is ticking away and farmers are becoming a little more anxious about this upcoming season.  -CK
Posted by First Warn Weather at 1:08 PM