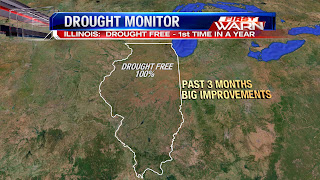 The latest release of the Drought Monitor shows Illinois is 100% drought free for the first time since last year!  Recent rainfall over the past couple of months has significantly helped the drought conditions across the Stateline; including southern Wisconsin.  Earlier 'abnormally dry' conditions had been reported across northern Illinois but with the latest release last Thursday, April 11th, the entire state had been taken out of the drought.  Southern Wisconsin has seen some improvements as well, but the western and 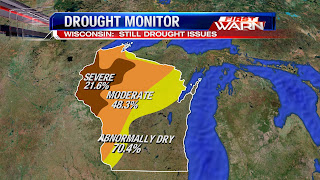 northern parts of the state continue to suffer.  The cold in place across the upper Midwest and Plains has made it hard for any moisture to really saturate the ground due to all the late season snowfall.  Roughly 2"-9" of snow is still covering the ground up north with possibly a little more to come by the end of the week.  For a complete look at the drought monitor, click here.
Posted by First Warn Weather at 12:33 PM