A warm end to the end of April, but showers and thunderstorm also possible

Temperatures Monday afternoon will rise into the low to mid 70s as clouds increase from the west.  A cold front extending from Wisconsin back through Iowa will slowly sag southeast and weaken as it does.  Thunderstorms, some severe, have been developing along the southern edge of the front in Iowa between Waterloo and Dubuque and will continue to move west to east into southern Wisconsin this afternoon. 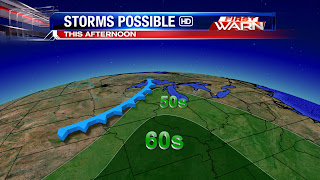 Dew point temperatures remain in the low 50s with 60° dew point moisture further south.  Thunderstorm coverage through the afternoon will be largely dependent upon whether or not dew points rise closer to 60° by this afternoon.  There is a weak upper level disturbance moving out of Nebraska and this will be the trigger for additional storm development in southwest Iowa later today.  If our dew points can recover later today severe storms will become a little more likely across northern Illinois and southern Wisconsin.  If dew points remain slightly lower the severe threat will decrease. 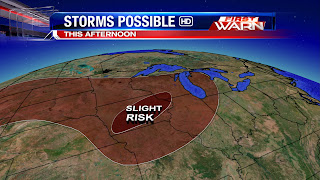 Greatest threat from any storms that do move through would be hail and wind.  Reports of pea up to quarter sized hail have already occurred with storms that has been moving across southern Wisconsin and far northern Illinois.  Once the cluster of storms moves out of the area things should remain quiet until this evening when additional storm development is possible.